Other than tending to emergencies, what are the three things you should do after a car crash?

This video is about the 2d of 3 things you should do after a car crash to protect your rights.

So, how do you protect yourself?

You’re in a car crash. The other driver ran a stop sign and hit you. But the other driver doesn’t want to call the police. He asks you not to call them. He offers to pay your damages out of his own pocket. Or, maybe he’s a truck driver, and he says that if you call the police, he’s going to lose his license, because he’s already been in a couple of other accidents. You don’t want to hurt the guy personally. So, you agree. You get his phone number, and you both leave the scene of the accident.

How do you protect yourself from him later claiming that you were at fault? He said he was sorry at the scene. But he tells his insurance company a different story. And there is no police report, no statements, no pictures to contradict him. It’s just your word against his.

What could you have done differently?

But, if you find yourself in that situation, and you decide not to call the police, use your cell phone to document and preserve evidence.

This video is about the 2nd of those 3 things. You want to use your phone to document liability, use it to help you later prove the other guy was at fault. And you do it in a way where he can’t deny it.

Let’s assume you’ve just been in an accident. You don’t want to be stuck in a situation where the guy says he’s sorry after the accident, because he ran the red light. But then weeks later, you find out he told his insurance company that you had the red light.

He asks you not to call the police. Here’s your answer:

# As a condition of not calling the police, insist that the other driver admit liability while you make a video using your phone. You can put everything on the video. You can say, we are making this video because Mr. Smith does not want to call the police. So, before we leave the scene I want him to admit on video that he had the red light. And then have Mr. Smith make his statement admitting that he ran the red light.

Now, on the one hand, that may seem awkward asking them to do that for you. But remember, THEY just asked YOU to do THEM a favor by not calling the police.

# And what you are asking in return is a very simple thing. They are asking you to do them a favor by not calling the police. So, they should have no problem with making this very simple video for you, in return. If they have any reservations about it just say, that’s fine, we’ll call the police now.

So, you just give them a simple choice. Make the video, or we’re calling the police. You’re fine with either one. It’s COMPLETELY their call.

So that’s the 2nd of the 3 things you should do after a crash to protect your rights. Use your phone to document liability, use it to help you prove the other guy was at fault. And you do it in a way where he can’t deny it.

I’m Kirk Piccione, and I’ve been representing people in all kinds of car crashes and trucking accidents for over 30 years. I’ve seen it happen. Check out my other videos detailing the 3 things you should do after a car crash to protect your rights.
James Kirk Piccione APLC
2701 Johnston St Suite 301
Lafayette, LA 70503
337 233 9030 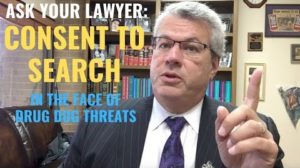 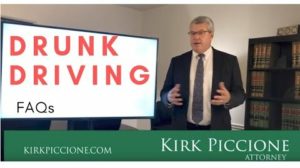 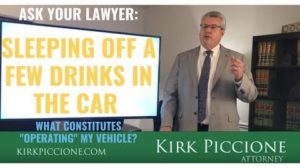 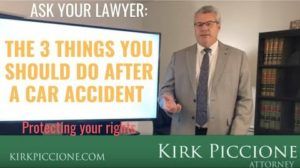 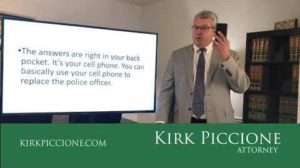